There’s a particular poignancy behind the title of Magnus Öström’s first album as a bandleader, Thread of Life. The drummer in the leading jazz group of the Noughties, E.S.T., Öström refers to the thread of life as the energy that keeps everything alive but warns that as it is only a thin thread, it can be cut at any minute.

Öström knows this only too well. When the news came through in June 2008 that Esbjorn Svensson, the pianist who gave his name to E.S.T. (they were originally called the Esbjorn Svensson Trio), had died in a diving accident off the Stockholm Archipelago, Öström felt that his own life had stopped.

“It was like losing a brother for me,” says Öström, who brings his new group to Edinburgh Jazz Festival this weekend. “We’d been friends since we were three, four years old and ever since we were kids we’d talked about forming a band that would conquer the world. It maybe sounded unlikely that these two boys who lived just across the street from each other would tour the world and one day be famous, in jazz terms but also to some extent in rock music circles. But we were able to live our childhood dream. Then when Esbjorn died, suddenly it was all finished. It was really hard to believe that we wouldn’t be making any more music together because we had so much still to do, so many ideas still to pursue.”

As with his fellow E.S.T. member, bassist Dan Berglund, Öström’s response to Svensson’s death was to stay at home, stunned into virtual silence. He even considered taking up another career, despite a list of achievements in music that include drumming not only with leading Swedish jazz musicians, including pianist Bobo Stenson and bassist Palle Danielsson, but also Americans such as Benny Golson, Buster Williams, Roy Hargrove, and someone who played a part in Öström’s return to the drum stool, guitarist Pat Metheny.

“For a long time I couldn’t think of anything positive,” says Öström. “But then somehow I realised that I had to find a way back because I wasn’t finished with music.”

Öström had begun playing music with Svensson in the latter’s living room, where the family piano sat and where Öström drummed along on his knees to Svensson’s playing of pop tunes. They then progressed to the garage where having rescued half a dozen or so of his painter and decorator father’s empty paint tins from the bin, Öström constructed his first set of drums. They weren’t quite ready to take the jazz world by storm at this point, being only eight years old and being more influenced by the heavy rock of Deep Purple, Jimi Hendrix and Lynyrd Skynyrd that Öström heard through his older brother. But the dream had begun. It progressed with a leap a year later when Öström’s parents relented and bought him a proper drum kit for Christmas. A year further on, Öström was playing his first concert at school with a band called Beware the Beginners.

It was his older brother again who proved the catalyst in starting Öström’s jazz career when he took him to see the mighty Billy Cobham playing with John McLaughlin in 1978. Aged thirteen, Öström had found his calling and he and Svensson then spent the next three years playing together in various bands, playing styles from dance music to punk rock, because that’s where the gigs were, but with a particular interest in jazz fusion. They formed an embryonic E.S.T. during those years before their formal music studies took them down different routes. While studying at the Royal Conservatory of Music in Stockholm, Öström played in a series of jazz bands before joining singer Monica Borrfors’ group which toured extensively throughout Sweden and beyond. “Playing live, especially with a singer, is the best school in the world for a young drummer,” he says.

In 1989, he and Svensson got together again and formed Stock Street B, whose musical experiments included gadgets such as samplers and octapads. They were ahead of the market and people often assumed that they were playing to backing tracks but everything they played was live. With the addition, in 1993, of Berglund, a bass player who could provide a big pulse while negotiating the intricate bass lines lines that Svensson wanted at the heart of the music (listen to And God Created the Coffee Break for the perfect example), the Esbjorn Svensson Trio began to develop the sound that would influence even American jazz musicians, who generally follow their own tradition.

Öström’s drumming – precise, minutely detailed and drawing on the full dynamic range from delicate touches to thunder claps – was central to this sound, a sound that took E.S.T. into the pop charts at home, filled stadia around the world, attracted screaming teenagers to jazz gigs, and even found the band appearing in Swedish crime fiction, which enjoyed a popular surge about the same time as the band was taking off. Leading Swedish author Arne Dahl’s hero detective often relaxes off duty by listening to E.S.T., which Öström found very flattering.

“It’s hard to explain in words what I was trying to achieve with the drums,” he says. “But in a way I’m not really a drummer. I’m more of a painter, a colourist. I’m interested in articulation. It’s like when you speak. Whether you’re playing something really strong or something very, very soft, for me, you should do it with the same intense energy.”

His likening of drumming to speaking proved apt when, having resumed playing music through some dates with bassist Lars Danielsson’s band and co-producing singer Jeanette Lindström’s Attitude and Orbit Control album, he decided to form a new group.

“I’d written some new music because I found composing helped me to get over losing Esbjorn and E.S.T.’s record company, Act, liked what they heard,” he says. “So I invited some of the musicians from the Jeanette Lindström album sessions to my own little studio to play my tunes and we ended up jamming, playing completely free, for about two hours. That hadn’t been the plan but it turned out to be a great way of getting to know each other because you’re communicating almost in a deeper way than if you talk to each other. Then when we actually played my music it felt really good.”

One of his compositions, Song for E, as its name suggests, was dedicated to Svensson and Öström was able to arrange for Pat Metheny, a big E.S.T. fan and one of the very few musicians who ever played onstage with the trio, to play on the album version. Metheny, Berglund and Öström have since played this piece live, at the JazzBaltica festival in Salzau, Germany earlier this month.

“I’m not sure what else might happen with Pat but I hope we can continue our relationship,” says Öström. “I’m also not sure what’s going to happen with the band that made the album because the guys all have other commitments. The keyboards player, Gustaf Karlof, for example, has a pop group, Niki and the Dove, that is quite successful and he won’t be coming to Edinburgh with us because they’re busy. But there are a lot of good musicians in Sweden and we can always find a deputy. It’s one of the great things about E.S.T. because although there were great jazz players from Sweden before we came along and we always felt that we were standing on the shoulders of heroes, we opened some new doors and people are interested in hearing new music from Sweden now, not just in jazz but in other genres. So it feels good to have done that pioneering work.” 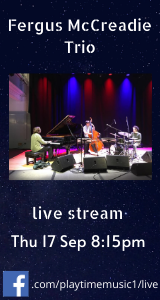