Sheesham & Lotus & Son - Dressing the part and doing it with heart 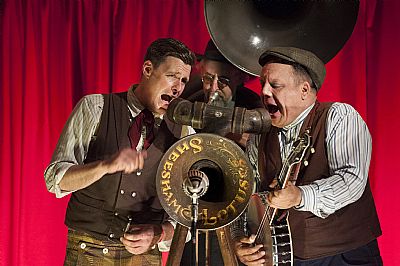 Sheesham & Lotus & Son don’t really live in a place called Vaudeville. If they did, though, they would surely win the contract for its tourism PR. In their bowler hats, high-waisted trousers and waistcoats and playing old-time fiddle tunes, banjo blues and sousaphone-driven ragtime by the glow of a few footlights, the trio make Vaudeville appear and feel like the ultimate fun destination.

All the more strange, then, that their latest album, 78rpm, was recorded in Skegness, a resort that aspires to compete for visitors with a similar strapline and turns out to be where these three Canadians’ dreams came true.

“The director of the SO Festival in Lincolnshire happens also to own a 1938 Presto 78rpm recording lathe,” says Teilhard Frost aka Sheesham. “So when our agent booked us into the festival last year, we had to take advantage of this opportunity to record under the same conditions as the people who inspired us. We spent seven days playing in different towns in rural Lincolnshire preceded by a recording session during the day. It was great because this rigorous schedule ensured that we were at our performing peak for both the recordings and the concerts and although what’s on the CD are digital re-masters of the recording sessions, it’s a pretty decent glimpse into what was a transformative experience for us.”

The trio weren’t always purveyors of music from a bygone age. Sheesham and Lotus were punk rockers and big fans of ska in their teens and Son Sanderson was and remains a busy all-round musician who plays piano, violin and trombone in bands of varying styles when not being the butt of the others’ jokes and strapping himself into several yards of brass tubing.

“My parents were into old-time music and there were quite a few old-time fiddlers where we lived who would scratch away at these tunes,” says Frost, who played fiddle and – tellingly, as we’ll discover – trained as a dancer as a youngster. “Punk and old-time aren’t so dissimilar. There’s a DIY quality about both styles of music and when we decided to concentrate on these old fiddle tunes and blues there was an energy about the way the old time musicians played and presented them that really appealed, as there was with punk.”

Dressing the part – for a while they actually wore brown clothes exclusively to give them a sepia image – isn’t so much about escapism as continuing a tradition, for Frost, although he concedes that they do represent a different world.

“People say, you wouldn’t want to live back in those days, when there was no penicillin and such, and that’s true,” he says. “We like to think that we’re bringing the past into the here and now. We’re all modern day guys away from the music. We don’t shun phones or the internet – or air travel – but by wearing the clothes they wore back in the day we can feel the part and somehow, we hope, make the music more real. It’s a best of both worlds situation: we live in the present but enjoy the past.”

The Sheesham & Lotus & Son repertoire presents mountain fiddle tunes and blues as if they’re part of the same music and the chances are that they were. Down in the southern states, in Georgia, Alabama and Mississippi, when itinerant workers took a break or relaxed after a hard week in the fields they’d play music and borrow tunes, picking styles and rhythms from each other.

“It sounds like a cliché but the cotton fields were a real melting pot as far as culture was concerned,” says Frost. “And although they lived a hard life, these workers knew how to make the most of the time they had to themselves, whether they played fiddle, banjo or no instruments at all.”

This brings us to one of Frost’s, or Sheesham’s specialisms – hamboning. A style of body percussion that singers used to accompany themselves, Frost has developed it into a high art form, helped it turns out, by his training in ballet as much as a previous life as a percussionist.

“It’s really a kind of free expression – in every sense,” he says. “Anything goes, as long as you keep the rhythm going, and the great thing about it is that it requires no batteries. Anyone can do it. It’s back to DIY music and the idea that most folk music, for want of a better expression, is for dancing. I love when we get folks dancing. People can be so self-conscious about it but there’s no need. It’s tremendously freeing. Just get up with someone you love - or even someone you’ve never met – and wiggle.”