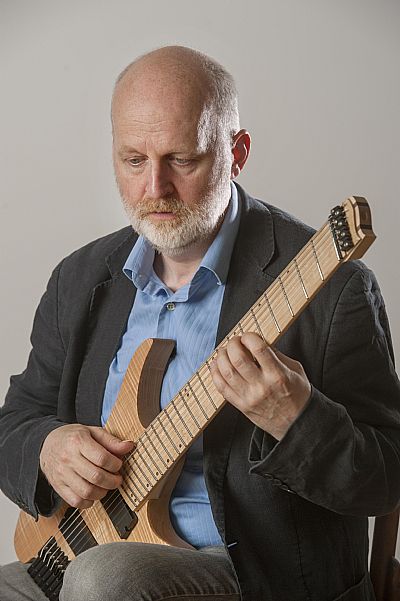 People who remember Don Paterson from his teenage years in Dundee and his early twenties in London would be surprised, to say the least, to hear that he’d neglected his guitar for serious lengths of time in recent years. The same people would have been equally taken aback to witness Paterson, the much-decorated poet emerging in the 1990s, confidently holding an audience in thrall to his wit, expertly sculpted phrases and sheer verbal command.

He was always sharp, always skilled with words. You wouldn’t have wanted to be at the opposite side of the Scrabble table from his competitive edge and should a crossword compiler get the better of his cryptic analysis, dark, dark clouds would form. It was the confidence that came as a surprise from someone who often gave the impression that the stage was a living hell to be endured in pursuit of guitar prowess.

That same confidence of expression earned Paterson a certain notoriety when he vented his wrath against Creative Scotland in 2012, calling the arts funding body a “dysfunctional ant-heap”.

Today he has revised this view. “A lot of people were making the same sort of comments,” he says. “It was a protest against a management style and the kind of jargon that puts up barriers. I’m in a different situation now. I’m not looking for funding and there’s been a change at the top since then, so I think the organisation’s style will have changed.”

Whether his broadside had any lasting effect he can’t say and whether the organisation might view him differently as a result, he has no way of knowing. A post in creative writing at St Andrews University shields him from the need to seek funding for his artistic endeavours, which these days are very much two-pronged.

After being silent as a musician for much of the past decade he is back playing guitar with a passion, leading a band formed early this year, The Don Paterson Situation, and exploring the possibility of a trio that involves his co-leader in the Celtic-jazz group Lammas, saxophonist Tim Garland, and the London-based Russian double bassist Yuri Golobev.

There might just be some mild musicianly envy with regard to Garland’s post-Lammas activities. The group recorded five well-received albums during the 1990s and worked with jazz luminaries including trumpeter Kenny Wheeler and pianist Jason Rebello. The now Brooklyn-based and widely lauded singer Christine Tobin was also an integral part of the line-up and Garland’s subsequent adventures as the frontline voice of legendary pianist-keyboardist Chick Corea’s The Vigil could mean that Paterson feels he has some catching up to do.

He’s certainly trying. After his guitar silence was compounded by a non-malignant tumour on the tip of his left index finger, resulting in severe pain and an operation that wasn’t, it turns out, absolutely necessary, Paterson got back into the kind of practising regime that once enabled him to replicate, with some success, the styles of his twin teenage heroes, the one-time fingerpicking master John Martyn and the highly individual jazz player John Abercrombie.

“I wasn’t entirely inactive during the noughties,” he says. “There were actually versions of the current band, with Steve Hamilton and Alyn Cosker on keyboards and drums alongside various other players, including saxophonist Laura Macdonald. We did a few gigs and Steve and I did some keyboard and guitar duo things but poetry had completely taken over by then and I wasn’t able to commit or maybe that should be multitask.”

It was Hamilton who nagged Paterson back into making music again with Cosker on drums and Euan Burton on bass. Paterson is not slow to acknowledge the debt he owes the keyboardist for this, especially since Hamilton has generally kept busy with commitments that include work with two major figures in the drumming world, Bill Bruford, whose Earthworks he featured in for several years, and Billy Cobham, with whose band he currently tours.

With the Don Paterson Situation, which has gigs lined up in the new year, Paterson is playing a style of guitar that, he says, takes him away from the competitive mind-set.

“I’ve kept up with developments,” he says. “I watch the way someone like Ant Law plays and can only marvel at his ability. It seems to be less about playing things you might practise to impress people these days and more about genuine exploration of the whole instrument.”

His own playing, on both acoustic and electric guitars, borrows to some extent from another hero, Ralph Towner’s fingerstyle technique. It’s unlikely, however, that he and Towner – broad as Towner’s repertoire is – share the same taste for pop covers that has taken the Don Paterson Situation into the Elton John and Gilbert O’Sullivan songbooks as well as playing the kind of melodic jazz for which Lammas became known.

“I might have some surprises on the next gig,” he says. “I always listened to pop music rather than rock and there are a couple of Wings numbers that I’ve been toying with lately.”