Derek Gripper - getting to grips with kora music on guitar 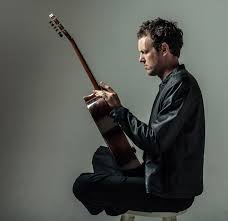 Derek Gripper might claim that he’d struggle to play the chords for Happy Birthday to You but what he has been playing for the past fifteen years or so has been known to bamboozle guitarists to whom such a chord sequence would be second nature. Indeed, when the great classical guitarist John Williams heard that Gripper was attempting to play Malian kora master Toumani Diabate’s music on classical guitar, his first response was: “impossible”.

Gripper’s own initial reaction to the idea of playing kora music on the guitar was much the same. Something made him persevere, however, and the result is that both Williams and Diabate, who to begin with thought that Gripper was ripping him off, have now reviewed their opinions completely. Williams is such a fan that he has twice invited Gripper to appear on his John Williams Series at the Globe Theatre in London and Diabate considers Gripper a hero for elevating him to the status of a composer whose music, thanks to Gripper, has now been played by the state of the art string quartet, the Kronos Quartet.

The remark about Happy Birthday to You stems from the Cape Town born Gripper’s introduction to music on the violin at the age of seven.

“By the time I started teaching myself guitar in my mid-teens I’d been playing violin for about eight years and I was very much a melody player,” he says via Skype from Cape Town as he prepares to make his Scottish debut later this month with a series of dates including two appearances at Celtic Connections. “I didn’t really think harmonically at all and when I tried the piano it wasn’t such a great success, probably for the same reason.”

It was while studying Carnatic music in southern India that Gripper decided that he’d be better concentrating on guitar than violin. He’d gone to India at the invitation of a violinist he met on a concert to mark the anniversary of Nelson Mandela’s release from Robben Island and quickly realised that he wasn’t going to reach the standard of the Carnatic violinists. India, as far he could discern, didn’t have any guitar stars to offer him competition. He’s since discovered slide guitar monster Debashish Bhattacharya and learned otherwise but by then he was on a guitar mission.

When Gripper was growing up his father was forced into exile in the UK after deserting his post during the forced army conscription that operated during apartheid and by an odd paradox, he heard more African music when he visited his father over here than he did at home. He’d heard percussion group Amampondo, among others, but Toumani Diabate’s first solo album, Kaira was a revelation.

“I was never a great music collector,” he says. “I knew people who had tons of albums in the vinyl era and listened to all sorts of things but Kaira was my go-to album. I listened to it non-stop for about ten years. To me it was untouchable music and for a long time I thought that the guitar was completely unsuitable for playing it.”

One day he came across a video of Vieux Farka Toure, son of the late Malian blues hero Ali Farka Toure, playing guitar and he began to hear Malian music in a different way. What he’d previously assumed was totally improvised music, he realised, was really a set composition with variations. So he set about transcribing Diabate’s music, painstakingly, note by note, and once he had it written down, he says, “some of the voodoo had gone.”

With albums such as One Night on Earth Gripper has taken African music into the classical guitar repertoire while also impressing world music connoisseurs and other musicians including Brazilian guitar and piano sorcerer Egberto Gismonti, with whom he has a project on the stocks. Initially, Toumani Diabate didn’t want to know about this classical musician he kept hearing about who was playing his music.

“It was his record producer, Nick Gold and his manager, Lucy Duran, who eventually got Toumani to see that, rather than ripping him off, I was crediting him,” says Gripper. “Once Toumani listened to me playing his music and to the arrangement I’d written for the Kronos Quartet, he emailed me and invited me to a festival he was playing at. It’s just a matter of perception: to us what he does is magic and we’re blown away that he creates this magic with his hands. And to him, coming from an oral tradition that goes back hundreds of years, it’s magic that what he does can be written down on a page.”