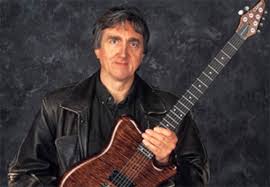 Allan Holdsworth, who has died at the age of seventy, was a guitar player without equal. With an utterly distinctive style that married extraordinary technical facility with a touch and tone that conveyed emotion even in his most intricate improvisations, he was admired by fellow players including John McLaughlin, Eddie Van Halen and Frank Zappa. More than that, though, his influence extended across jazz, rock, heavy metal and pop chart artists such as Nik Kershaw and Level 42, with whom he recorded and toured at one point.

Born in Bradford, Holdsworth grew up listening to his father’s jazz records. His father played jazz piano and tried to persuade Allan to follow suit to no avail. Allan was convinced that music was something to enjoy listening to, not playing, until he heard one of his greatest influences, saxophonist John Coltrane.

Saxophones were too expensive so his father acquired a guitar from one of Allan’s uncles and the fifteen year old began trying to replicate saxophone lines on the guitar. He also listened to guitarists including Charlie Christian, Jimmy Raney, Joe Pass and Tal Farlow, and despite his apparent aversion to the piano, there was a strong element of pianism in his playing, too, especially in the exhaustively researched chords he fashioned with his fingers’ uncommon reach.

At the age of seventeen he joined a local band playing the chart hits of the day. He also played in ballroom orchestras in Sunderland and Manchester, where he met the saxophonist Ray Warleigh, who suggested Holdsworth should move to London. He would take up Warleigh’s invitation to flat-share presently but first he formed the band ’Igginbottom, whose natural blend of jazz and rock won an admiring sleeve note by saxophonist and jazz club owner Ronnie Scott for the band’s sole album.

Once in London Holdsworth quickly made an impression. His group Sunship with keyboards player Alan Gowen became a word of mouth live attraction and an appearance on trumpeter Ian Carr’s Belladonna album and gigs with Carr’s band, Nucleus led to Belladonna’s producer, drummer Jon Hiseman inviting Holdsworth into his new band, Tempest. By 1973 Holdsworth was causing enough of a stir to win the New Star title in music weekly Melody Maker’s jazz poll and he came to the attention of Soft Machine who were looking for a strong soloist as their saxophonist, Karl Jenkins (now Sir Karl) wanted to concentrate on composing.

Holdsworth’s impact on Soft Machine was startling. Jenkins created Hazard Profile, a five part suite specially to feature the guitarist and in concert and on the album Bundles, Holdsworth tore it up with brilliantly sustained invention. When they toured the US Holdsworth unsurprisingly was noticed and the former Miles Davis drummer Tony Williams, looking to reform his incendiary band Lifetime, invited him to join a line-up including Cream bassist Jack Bruce.

This didn’t work out and there was confusion, followed by on-off tours, in Soft Machine before Holdsworth phoned his successor, John Etheridge and told him to get in touch with the band’s management because he was now in New York, playing with Tony Williams.

The Tony Williams’ Lifetime albums Believe It and Million Dollar Legs were even bigger calling cards than Bundles was for Holdsworth. He was now the guitarist’s guitarist and for a time he commuted between the UK and the US, playing with violinist Jean-Luc Ponty across the Atlantic and with drummer Bill Bruford’s band and subsequently with bassist John Wetton, keyboardist Eddie Jobson and Bruford in the briefly popular prog rock group UK over here. He also played with psychedelic rockers Gong (their Gazeuse album was named after Holdsworth’s favourite term of approval at the time) but was just as likely to turn up playing jazz with his friend, pianist Gordon Beck’s trio in London pub gigs or tour in a group with long-time associate, drummer Gary Husband who later talked Holdsworth into Level 42, playing largely spontaneous music.

By the early eighties, one of Holdsworth’s biggest admirers, Eddie Van Halen had convinced his record company, Warner Bros to sign Holdsworth, who was now living in Southern California. A happy outcome was by no means assured. Holdsworth didn’t enjoy the business side of music. He was furious when a rehearsal tape was released as an apparently official album, Velvet Darkness, and he once told this writer that he’d just like to have a few pints (he was a real ale enthusiast), play some gigs and keep improving.

If the Warner Bros deal didn’t last beyond his label debut, the Grammy nominated Road Games, Holdsworth’s career still flourished in the US. After building his own studio, mischievously named the Brewery (he did also make beer), he released a series of enthusiastically received and laboriously dissected albums, often featuring the SynthAxe, a guitar-like MIDI controller. He released his final studio album in 2001, preferring thereafter to play live and follow his goal of spontaneous creativity on extensive tours across America and Europe.

His sudden death comes just days after Los Angeles-based Manifesto Records released a twelve-CD set of all his studio albums, re-mastered. Although the self-effacing Holdsworth wouldn’t have cared for its title – The Man Who Changed Guitar Forever – it rightfully documents a singularly inventive musician, even if he was seldom happy with his performances and could drive bandmates to distraction by recording guitar solo after guitar solo, only to discover that the first one was unbeatable. He is survived by his daughters, Lynne, Emily and Louise, his son, Sam, and his granddaughter, Rori.