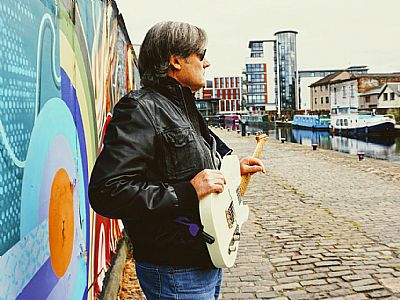 Neil Warden was sitting in the garden of the house in Dunfermline that he moved to recently when a thought struck him. Not only had the guitarist returned to his hometown, he now lives just fifty yards from where he took his first steps into making music.

“I looked up and realised that the house along the street was where I started going to jam with this slightly older guy who introduced me to guitarists like Larry Coryell and Leo Kottke,” says Neil who, over the past forty years, has played with Scottish blues singers Tam White and Maggie Bell. He’s also featured alongside musicians including the late rock-pop hit maker Jim Diamond and King Crimson bassist Boz Burrell while enjoying success with his own music on both sides of the Atlantic.

Neil grew up with a soundtrack of his dad’s jazz records playing at home. The Count Basie Orchestra, organist Jimmy Smith and guitarist Wes Montgomery were his dad’s particular favourites and Neil was drawn to playing the guitar. He took classical guitar lessons at school and learnd about both acoustic and electric guitarists from his mentor down the street.

“There was a lot of music in Dunfermline when I was in my teens,” says Neil. “If Nazareth were back in town, you could hear them at the Kinema Ballroom, which was a popular spot for touring bands like Georgie Fame and Jon Hiseman’s Colosseum. Tommy Sampson’s orchestra would be playing in the Elizabethan. There was a good folk club and I particularly remember Alan Darby, who went on to play guitar with the soul band Cado Belle and who could play Santana’s Abraxas album in its entirety and – to me – sounded just as good as Carlos Santana.”

In his mid-teens Neil joined the prog rock band Joe’s Diner and gigged across central Scotland. When not playing with the band he was listening to music at home – organist Brian Auger and guitarist Cornell Dupree were favourites at the time – or going out to hear the saxophonist Jim Kyle, whose brother Bill played drums and went on to play a major role in jazz promotion. Neil was also always up for a jam and remembers getting together with local fiddler Pete Clark, now a doyen among traditional music players, to play tunes by the far-from-traditional Mahavishnu Orchestra.

In 1982 Neil left Dunfermline for Edinburgh, where he met Tam White. Initially he was White’s guitar teacher as the blues singer worked on a more self-contained acoustic style in contrast to his powerful band, the Dexters. This led to Neil joining White’s Shoestring Band, a long-running trio with harmonica player Fraser Speirs.

When White’s busy schedule allowed, Neil played sessions and worked on his own music. A CD, Blue Soul Groove, which followed the jazz-funk style of bands like Stuff and the Crusaders, performed a similar “coals to Newcastle” trick as the one that took fellow Scots the Average White Band to the top of the US charts. Radio presenters in New York were convinced they were playing music created in a nearby studio rather than Neil’s home studio in Edinburgh with friends including saxophonist John Burgess.

More recently, Blue Soul Groove also became Neil’s passport into a new project. Back in Dunfermline and having health issues, including Bells Palsy, which has affected his vision, he was keeping active musically through his work on the Weissenborn slide guitar when his Shoestring Band colleague, Fraser Speirs got in touch.

“Fraser said he was recording with Dave Pringle, which was a name I knew from way back,” says Neil. Edinburgh-born Pringle, who composed theme tunes for TV programmes including Wheel of Fortune and whose CV includes work with Dolly Parton, David Soul, Hoagy Carmichael, Annie Ross, and Georgie Fame, among many other notables, recently returned to Scotland after many years in the US.

“Dave is sounding great and the recordings Fraser mentioned have turned into a double album,” says Neil. “They asked me to add guitar in the Blue Soul Groove style. It turned out to be a lot of work, learning new tunes, then recording my guitar parts at home. But I’m happy with how it sounds. The album’s called Once in a Blue Moon and I enjoyed the whole experience immensely.”