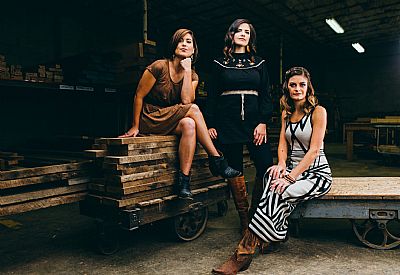 Saxophonist and jazz club owner Ronnie Scott had a jokey rejoinder for anyone asking if his band played requests: “Only when we’re asked.” Underhill Rose, on the other hand, might take suggestions for songs to be included in their live shows much more to heart.

The trio from Asheville, North Carolina, who make their Scottish debut in Aberfeldy on Tuesday, June 13 before going on to play concerts in Glasgow and Edinburgh, have just released their fourth album, Underhill Rose Live. Recorded over two nights in their home state, the album gives a taste of the cover versions the three songwriters can slip into a live set alongside their own material.

Some of these songs, such as Richard Jones’ Trouble in Mind and John Prine’s Long Monday, are part of the rootsy tradition that Underhill Rose are continuing. Others, though, are slightly more left-field.

“These Boots are Made for Walkin’ was Molly’s dad’s idea,” says Eleanor Underhill, who started playing music as a hobby with Molly Rose Reed at Warren Wilson College, near Asheville. “We were staying with Molly’s folks after a gig one night and when we got back to the house, her dad said he had a good idea for a song for our bass player, Salley, to sing. So we worked it up in our own way over breakfast the next day and people seemed to like it.”

The Kim Carnes hit Bette Davis Eyes was more of a challenge. None of the group knew it when a fan requested it, so Reed took on the job of learning and arranging it, and it too became a live hit.

“We really set out to play our own songs, because all three of us write, but sometimes one of us will hear something that we particularly like and would be fun to sing,” says Underhill. “It’s also good to take on board fans’ suggestions because, as with Bette Davis Eyes, at first we thought, this could be a challenge too far. But it turned that the fan was right and Molly did such a good job with the arrangement, so everybody’s happy.”

When Underhill met Reed at college, although she’d always been interested in music, she had more academic intentions than playing in a band. She graduated in environmental studies with the idea of teaching children about saving the planet, which explains the use of eco-friendly materials on the new CD’s packaging. Reed comes from a musical family – her father’s a classically trained musician, her mother’s a blues singer – and soon she and Underhill were appearing in the Barrell House Mamas, a band that became popular across the south-east of the U.S.

The band broke up in 2009 but Underhill and Reed continued to sing as a duo, using Reed’s middle name,  and when Reed met Salley Williamson at an African dance class and discovered she could sing and play double bass, the three got together and found their voices were a natural fit.

“We just seemed to find our own places in the harmonies,” says Underhill. Some early admirers assumed the trio were sisters and their deft way with an unexpected song on gigs has seen them likened to New York siblings the Roches.

Their first three albums were quite heavily produced affairs and won them solid radio play. For Underhill and her bandmates, however, the CDs could be misleading as they didn’t capture the sound that people turning up to hear them in concert could expect.

“We wanted to have something that represented the authentic live sound of Underhill Rose,” says Underhill.  “So we arranged to record two nights close to home, one in Asheville and another in a favourite venue in Lexington, North Carolina, so that we’d be surrounded by the people who’d been supporting us longest. Molly’s grandmother was sitting in the front row on one of the gigs, as you can hear just before Bette Davis Eyes, so it really was like singing to friends and family.”

Their imminent trip to Scotland may be their first time performing here but they have passed through before on their way to Ireland, where their harmonies and country lilt have won them a sizeable following.

“We’re looking forward to seeing more of the country this time,” says Underhill. “Last time we were only there for the few hours it took to drive to the ferry but the countryside looked familiar. They say the Scottish and Irish settlers chose North Carolina because it reminded them of where they came from, so we’re hoping to feel at home in Scotland. I think we might have more trees here than you do but I’m prepared to be proved wrong.”